A strange concoction in the worlds of conservation and tourism, Park Pumalin consists of two tracts of land owned by Douglas Tompkins, founder of The North Face who also created a park out of endangered wetlands in Argentina, at Rincón del Socorro. Tompkins began buying land in Chile in 1991, and now more than 700,000 acres of mountains, forests, fjords, and lakes fall under the auspices of his Conservation Land Trust.

The park’s only lodgings, Caleto Gonzalo,  and all campgrounds were closed after activity in the Chaiten volcano in 2008 and will stay shut until further notice. The northern part of the park is open, however, with its Cahulemó hot springs and also the valleys of Vodudahue, where you can visit an organic farm, a nursery for endemic trees, and do gorgeous treks, and Pillan, which has an organic bee-keeping project.

What They Are Doing

The Conservation Land Trust calls Park Pumalin a form of private environmental philanthropy, with one of its main objectives being the creation of a place for Chileans and visitors from abroad to visit and “develop a heightened awareness of the magic and beauty of the natural world, and in turn become active in their daily lives to value and protect nature.” But the park has also attracted its share of bad publicity.  People accuse Tompkins of being anti-progress and anti-development, while he argues that he is protecting parts of the earth for future generations.  (See video, below.)

The park’s rangers don’t wear uniforms but are in fact farmers who work the agricultural land adjacent to the park. These small farms have productive activities such as animal husbandry, cheese making, wool handicrafts, and organic gardens, and also encourage tourism. The farms, in other words, are also park stations and visitor information centers, and some of them even offer accommodations, such as Rincon Bonito, Rio Gonzalo, and Vodudahue.

In Their Own Words

“With this system we hope to create a balance between conservation and production at the local level.” 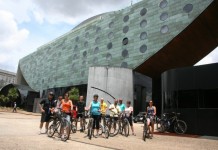