It is an audacious plan for any country, let alone Brazil and indeed São Paulo. Lincoln Paiva wants to put U-Bike, or Urban Bike, in 200 of the city’s hotels.

Unlike Velib and similar schemes in Europe and other parts of the world, where you rent a two-wheeler for 30 minutes or so before you have to return it to a nearby station, U-Bike is an organized way to get visitors around green-ly. And along the way, you learn something about where you are.

With U-Bike you don’t rent bicycles separately but as part of a group of anywhere from one rider ($100) to 10 or so ($30 per person). The more participants in your group, as you can see, the less it costs. For your money you get a bicycle, a helmet, a padlock, a guide – who could even be the CEO of a business who is giving up his time to partake in this green scheme – as well as an assistant and breakfast. There are four routes to choose from. Any income is plowed back into bike maintenance and other sustainability programs.

Paiva is president of the Green Mobility, which has launched U-Bike as part of a green initiative leading up to the 2014 World Soccer and 2016 Olympics. The U-Bike project in São Paulo is a collaboration between the city, bike manufacturer Caloi, and, for the first time, a hotel.

Hotel Unique is a boutique property in the garden district of Moema that boasted innovation before taking on the U-Bike program. From its copper façade to its porthole windows, it rises like a modern ocean liner, with the wood floors in its stern and bow rooms taking the shape of the ‘ship.’ Topped by the Skye restaurant overlooking the city, it has a crimson pool above, a stunning statue of St. George slaying the dragon in the lobby. There are 85 modern rooms and ten suites. 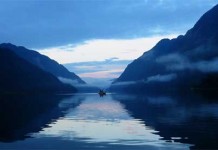