Spoiler alert: Sometimes the location is in the title. Good luck.

John Madden’s 2012 movie about a group of British retirees who arrive at a place they didn’t expect. The new hotel is only a shell of a building, managed by the ever accommodating Dev Patel.

The 1967 movie based on the Arthur Hailey bestseller, one of the first of the blockbuster movies with all-star casts, about the lives of guests and staff at the fictitious St. Gregory.

The first in a series of 3 animated movies, about the hotel where monsters go to get away from it all.

Two very different Americans cross paths at a hotel in the middle of a bustling foreign city.

The 1932 comedy with Greta Garbo and a slew of other famous actors of the time at a grand hotel between the wars that’s full of thieves, charlatans and lovers.

Probably not a hotel you’d want to go to, the Overlook, way in the snowbound outbacks of North America, where Jack Nicholson goes crazy as his son keeps repeating the word “redrum.”

Location: Shot mostly on a set in England, the hotel is meant to be in Colorado but the exteriors were filmed in Oregon.

Bad Times at the El Royale

Seven strangers converge on a rundown hotel on a night that all hell breaks loose.

Location: On the California/Nevada border.

Two youngsters need to find a home for their dog, and suddenly they have more than they bargained on.

Night of the Iguana

John Huston’s 1964 movie of Tennessee Williams’ story about a defrocked minister (Richard Burton) and three women at a hotel.

A madcap ride through past and present of the fabled Grand Budapest, directed by Wes Anderson. No, it’s not Hungary.

Location: The Zwinger Museum in Dresden, Germany, stood in for the fictional republic of Zubrowka.

Humphrey Bogart lands up at a coastal hotel where mobsters are staying. And so is Lauren Bacall. A classic from 1948.

Based on the true story of Paul Rusesabagina, manager of the Hotel des Milles Collines that gave refuge to thousands of people during the Rwandan genocide.

The 1984 movie based on John Irving’s book about the eccentric Berry family and their hotel.

Location: But they filmed it in the Hotel Tadoussac in Tadoussac, Quebec.

Most of the action in Julia Roberts’ breakout movie takes place in a hotel. 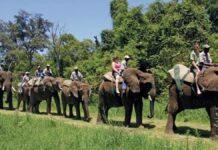