The La Colombe restaurant in Cape Town was named the country’s top restaurant of the year at the 2019 Eat Out Mercedes-Benz Restaurant Awards on the weekend.

This ones only when weeks after La Colombe was voted the 12th-best restaurant in the world for fine dining at the TripAdvisor Travelers’ Choice Awards.

All the top 10 Eat Out restaurants were in Cape Town and the surrounding area, except the Restaurant Mosaic at the Orient in Pretoria, which came in ninth. The others, in order, were the Test Kitchen (Cape Town), the Restaurant at Waterkloof (Somerset West), which came first in 2018, Wolfgat (Paternoster), FYN Restaurant (Cape Town), La Petite Colombe (Franschhoek), Eike (Stellenbosch), Salsify (Camps Bay), Chefs Warehouse at Beau Constantia.

The chef of the year was Bertus Basson of Eike and Overture restaurants in Stellenbosch, while Katlego Mlambo of the Marabi Club in Johannesburg was the Nederburg Rising Star. Joseph Dhafana of La Colombe won the wine service award. 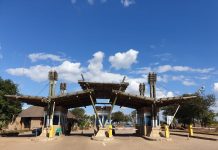 Kruger Park is NOT Open for Overnight Stays Yet