On January 30, 1948, Mahatma Gandhi was on his way to lead a multi-faith prayer meeting in the gardens behind Birla House, in New Delhi, where he had been staying for 144 days, when he was gunned down by a Hindu nationalist named Nathuram Godse.

In that place today a wonderful museum called Gandhi Smriti has been created out of the white mansion and gardens once owned by the wealthy Birla family. There one can walk through through a series of static and interactive displays that take you through the life of Gandhi, his birth in 1869, education, work as a lawyer and then a crusader.

The section of his life in South Africa, from 1893 to 1914, where he worked as a lawyer in Durban and Johannesburg, lived with the architect Herman Kallenbach, formulated the practice of satyagraha or passive resistance and led the 1906 Transvaal Rebellion, takes up a large part of the exhibition. It reminds visitors of the strong and long connection between South Africa and India.

Interestingly, it is less the fact that Gandhi was kicked off a train in Pietermaritzburg – which is nevertheless depicted in various places in the displays – but rather the words of admiration for him by the South Africa who at first was seen as his major enemy, General Jan Smuts, that feature prominently.

Smuts, whose actions as minister of justice at the time caused Gandhi to lead the silent rebellion against passes and segregation, came to respect Gandhi deeply. Gandhi in turn gave him a pair of sandals that he wore for many years afterward. And in various places around the exhibits, Smuts’ quotes about Gandhi are recalled.

“His work for Indian regeneration, more especially in its social aspect, seems to me among the greatest in the most fruitful of human tasks and in its extent surpassing that undertaken by any single man in our generation,” said Smuts. 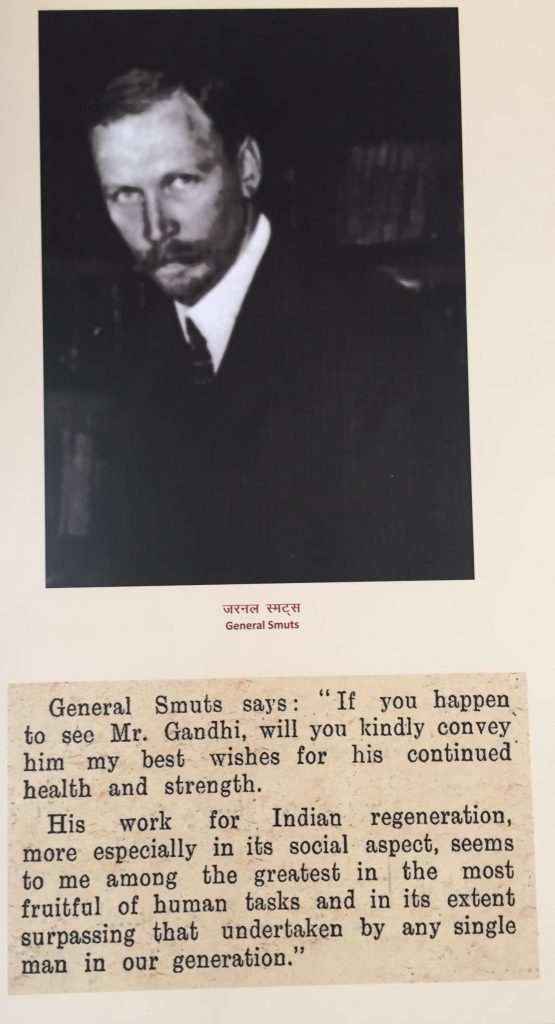