As lockdown in South Africa continues, people across the country continue to embrace virtual travel and daydream about their next trip. And while we might have to wait a little longer until we can hop on a KLM Royal Dutch Airlines flight directly to Amsterdam, here are 15 surprising facts you might not have known about the Netherlands to bring the Netherlands to you. 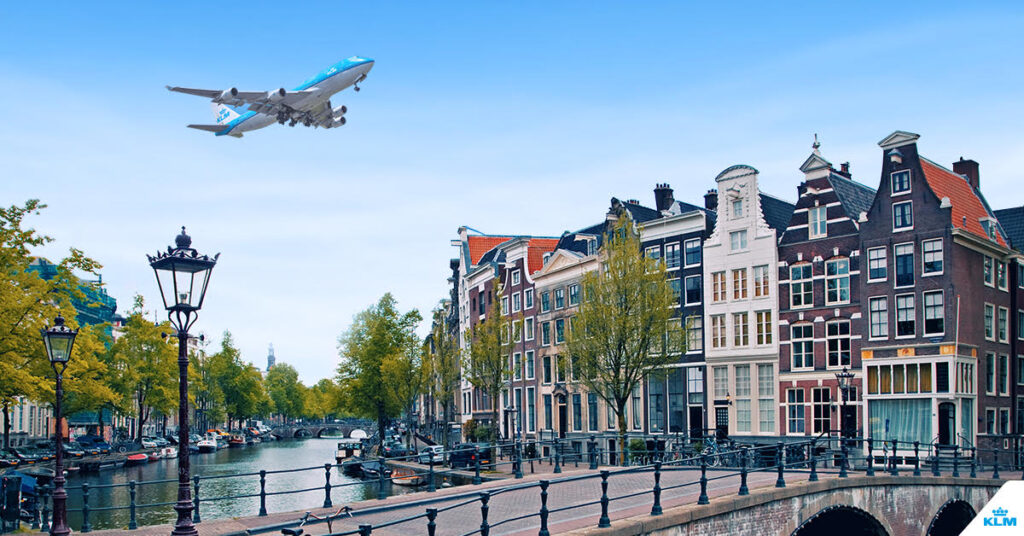 It is really, really flat

The Netherlands is extremely flat and around 40 per cent of the country actually lies below sea-level. This unusual geography is deeply intertwined with Dutch history and has helped to produce many things that are commonly associated with the Netherlands including the country’s canals, bikes and tulip fields.

Gin was invented by the Dutch and introduced to the Brits

It’s one of the most popular spirits in the world today, but did you know that Gin was invented in The Netherlands around the 16th century, and reportedly became popular in Great Britain after William of Orange (King William III) occupied the English, Scottish and Irish thrones with his wife Mary. The spirit inspired the term ‘Dutch courage’ from when gin was used by Brits and the Dutch during the Thirty Years’ War.

It’s one of the most urbanised places on Earth

There are roughly 17 million people who occupy the Netherlands today but what is interesting is that around 90 per cent of the country’s populations live in urban areas. In fact, over the past century, the four largest cities in the country, namely Amsterdam, Rotterdam, the Hague and Utrecht, have been moving closer together to form one of the most densely populated places in the world which is known as the Randstad.

In 2000, the Dutch government passed a bill which made same sex marriage legal in the Netherlands, making it the first country in the world to allow same sex couples to marry. The move inspired a radical change around the globe and today, 29 countries have passed the same bill – including South Africa, which was the fifth country in the world to do so.

Amsterdam has the most museums per capita in the world

For a relatively small capital city, Amsterdam is miles ahead above most when it comes to culture. The city famously boasts more museums and theatres per capita in the world including the world-famous Van Gogh, Rijksmuseum, and Stedelijk Museums.

King Willem-Alexander was the first Dutch king in 123 years

Last year, the Dutch national carrier, KLM Royal Dutch Airlines, celebrated their centenary. The airline became the first to celebrate 100 years of operation under their original name but, the brand has had 10 logo changes since its first flight. Today, the brand flies to more than 133 destinations in over 70 countries around the world – including South Africa.

12,000 kilometres of cycle paths run through the Netherlands

Cycling is more than a hobby or a mode of transport in the Netherlands, it’s a way of life. So much so that the Netherlands features one of the most extensive cycle networks in the entire world, which spans around 35,000 kilometres. Besides urban tracks, this network also includes many rural bike paths that trail between basically every settlement in the Netherlands.

in 2016, Schiphol operated 4,633 flights per week in 2016, according to a report by Dutch economic institute SEO on behalf of the Airport Council International. Schiphol is 100 percent government-owned and handles around 60 million passengers per year.

The Dutch introduced orange carrots to the world

Did you know that back in the day most carrots were either purple or pale yellow? However, Dutch carrot growers developed orange carrots in the 16th century through careful breeding of existing varieties.

CDs, DVDs, and Blu-Ray were invented in the Netherlands

Philips, a major Dutch company, developed CDs in 1979, in a joint project with Sony, in their Dutch headquarters in Eindhoven. The brand has been revolutionary in creating ways to consume media and also famously developed cassette tapes and popularised many home electronics items in Europe, such as TVs and blenders.

The discovery of microbiology and virology happened in The Netherlands

The Dutch have made some interesting medical strides over the years. In fact, the first compound microscope was built in the Netherlands in 1590 while in the 1670s, Antoine van Leeuwenhoek, called ‘the father of microbiology’ viewed and researched microbes. In 1898, Martinus Beijerinck made history when he showed that disease could be caused by an agent smaller than bacteria, which he called a virus.

Amsterdam’s canals are famous for a reason

There are 1281 bridges in Amsterdam, 80 can be found within the canal ring. The most famous bridge is the Magere Brug or Skinny Bridge. When you’re standing on the corner of the Reguliersgracht and Herengracht you can see 15 bridges at the same time. In fact, Amsterdam has more canals than Venice and more bridges than Paris.

Millions of tulips bloom every year

The Netherlands is famous for their bright, colourful tulip fields. Keukenhof Garden is the closest to the country’s capital and therefore the most popular place to witness the beauty of the tulips in bloom. In fact, more than seven million tulips bloom at the Keukenhof Garden annually alone.

The Dutch national anthem is the oldest in the world

The Dutch national anthem is said to be over 400 years old. While The Wilhelmus did not become the official anthem until 1932, the music reportedly dates back to at least the year 1572 – making it the oldest melody used in a country’s anthem. While the origin of the lyrics are uncertain, it is said that the words are at least 400 years old.