It’s hard not to feel both envious and a bit sorry for the staff at a game park during lockdown. While they had the incredible landscape and wildlife to enjoy, they had no one to share the experience and their knowledge with.

So, you could hear that sense of exuberance in having people back in the back of his Landrover with our guide Justin at Gorah Elephant Camp, which is part of Addo Elephant National Park. As we stopped at a watering hole early one morning this week and watched an old elephant bull with one tusk and a veteran Cape buffalo drink warily next to each other, before three other elephants arrived and displaced them, he told us about elephants fighting for dominance and the debate over whether tickbirds are indeed beneficial to animals and the behavioral changes of wildlife after rain.

It was all the kind of information that so enriches any game experience and makes you realise not only how much you’ve missed being in the wild but also what a privilege it is to have a good guide when you’re there and to return after each game drive to a place like Gorah.

One of the first luxury lodges  that was granted a lease on SA National Parks land in the early 2000s, the Hunter family that also owns Tsala Treetops and Hunter’s Country House, which it opened in 1989, and which are both on the Garden Route, created Gorah on a concession in Addo. Like all the private lodges on national park land, it has to be easy to dismantle and, once removed, not make any impact on the terrain. (Gorah, by the way, has an incredible special on until mid-December.) 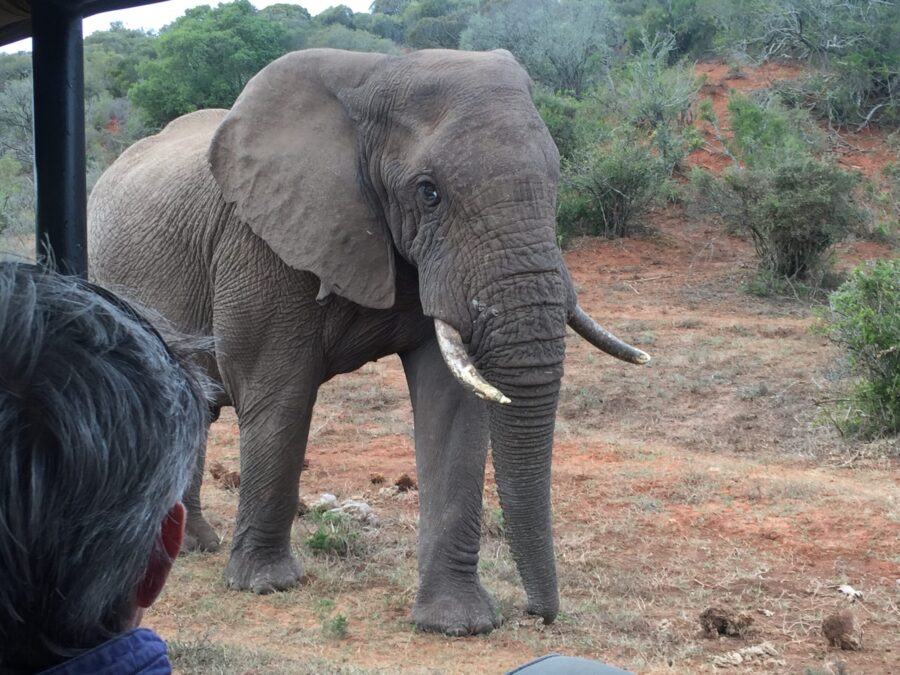 At places like Gorah Elephant Camp you have the advantage of seeing the greater park but also the backroads and Gorah’s own concession. The lodge, built in and around an old 19th Century farmstead, which has been furnished in deep plush chairs and has a fireplace to warm you on cool nights and mornings and a long porch overlooking a very active watering hole, offers 11 luxury tents that look out towards the Zuurberge. No fences separate you from the wildlife, and elephants, zebra and hyena come close often.

While Addo has long lived in the shadow of Kruger National Park, numerous changes over the past decade or more have lifted its fortunes. Extra land has been acquired to make it larger, lions were introduced, so now it has the Big Five, it is malaria-free, and it’s a close SANParks option to people in the Western and Eastern Cape. The terrain of rolling hills and thickly bushed valleys is different too, as is the wildlife. We saw vast herds or zebra and red hartebeest spread across open hillsides, as well as elephants, elephants, elephants!

It’s hard to imagine – when you see the large number of elephants today – that in 1918 the government decided to exterminate the last 100 or so of this most southerly herd of elephants in Africa because they were coming into conflict with farmers in the Sundays River area. Major Philip Pretorius, a well-known soldier and hunter of the day (read his fascinating autobiography, ’The Jungle Man’) was brought in to singlehandedly do the evil deed.

Whether or not it was Pretorius’s doing, there was a change of heart before all of the elephants were killed, and a pod of 16 were left. Today there are more than 600 in Addo, with some larger elephants also having been brought in from Kruger to add to the gene pool. The terrain at Addo apparently caused the original elephants to be smaller and have smaller tusks than their family to the north, although we saw some very big tuskers wandering around.

Unlike Kruger, which has numerous self-catering units run by SANParks, Addo has limited overnight facilities. Gorah, therefore, gives one the chance to stay inside the park but also in splendid, pampered isolation. While some people complain that places like Gorah are prohibitive for South Africans, they are, after all, the equivalent of five-star hotels and have high overheads to carry. That’s why the offer Gorah has now put out until the middle of December is definitely worth taking up. Not only because of what you get but also because – as anyone who’s found out while travelling around South Africa since lockdown eased up – the staff at Gorah are loving showing their world to a whole new, predominantly South African-based clientele.