It’s one of Cape Town’s many hidden secrets – The Steps. They are the long public flights of stairs (sometimes over 300 steps) that run between roads, their location often known only by locals and the residents who live along them. But slowly they are being  discovered by walkers and runners. Especially during lockdown, as exercisers sought new places to get up their heart rate and sweat, they took to places like the Biskop Steps in Clifton and Jacob’s Ladder in Kalk Bay. 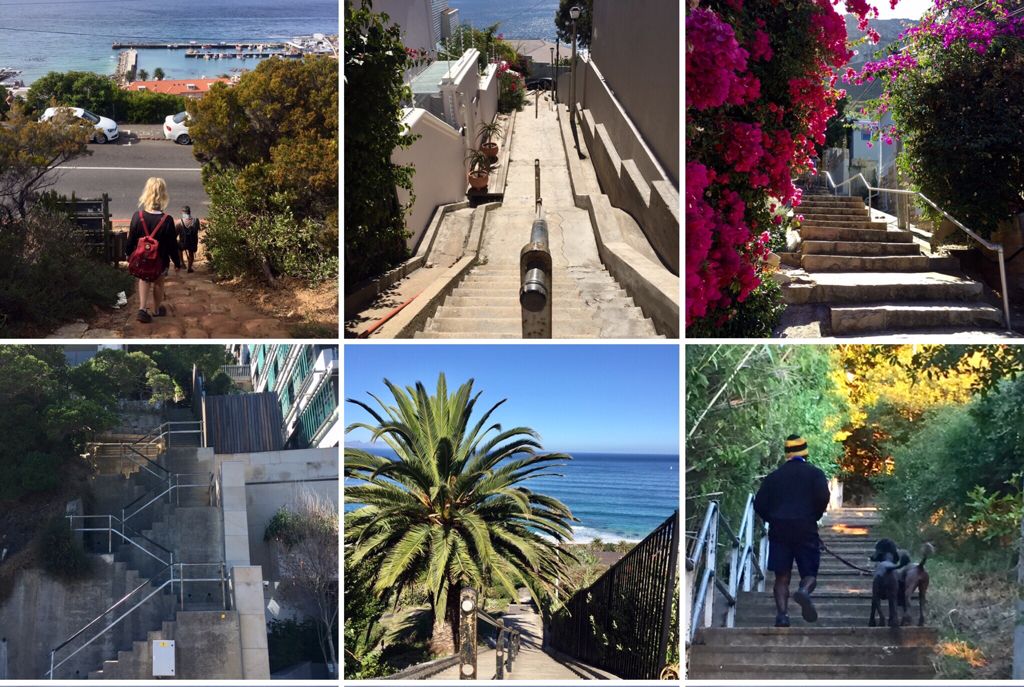 But there are dozens of other steps, some shorter and some longer, across the city, from the Atlantic Seaboard all the way to False Bay. Probably the best for anyone wanting to get a good workout in and get some great views is St. James, which has at least five extremely long staircases running between Main Rd and Boyes Drive.

Clifton has at least four. Muizenberg does too, but they are shorter, although doing a circuit up and down all of them would be a great workout too. There are cafes all over to start and finish at. And remember that people live along these stairs, so please be considerate when working out. See our six suggested routes all over the peninsula. 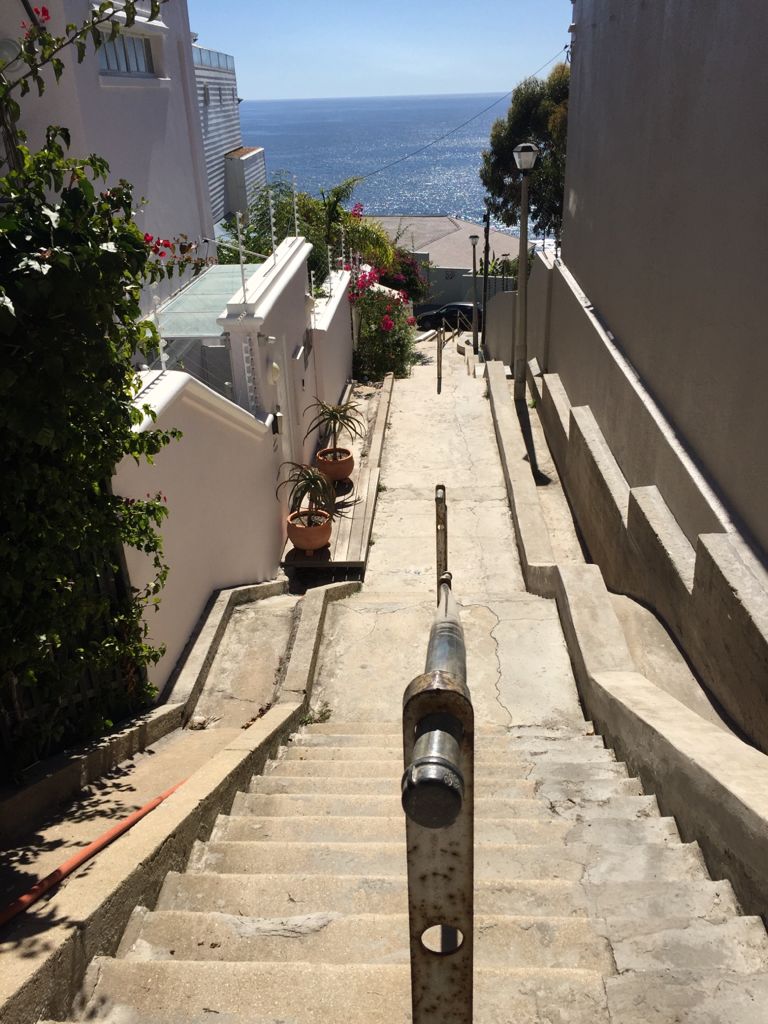 There is parking on Boyes Drive and on Main Road. Start at Westray steps on Boyes Drive and walk down. It’s pretty steep (270), turn left at the bottom and then right at Rodwell Road to take the rest of the stairs (54, which makes a total of 324) to Main Road. You come out at the St. James tidal pool. Turn right on Main Road and then right into St. James Road. The ascent is a great combination of steps (108) and very steep, winding paved pathway (220 steps, total 308). The views are spectacular.

Next along in St. James, driving to Kalk Bay, are the Sandhurst steps (272) with a bannister down the middle, which comes out behind the St. James Hotel. At Main Road, turn right and turn right into Jacob’s Ladder (334), which has stone steps, some quite long. It’s also a gorgeous walk. After those, there are three more, Capri and Ley and Hillrise. 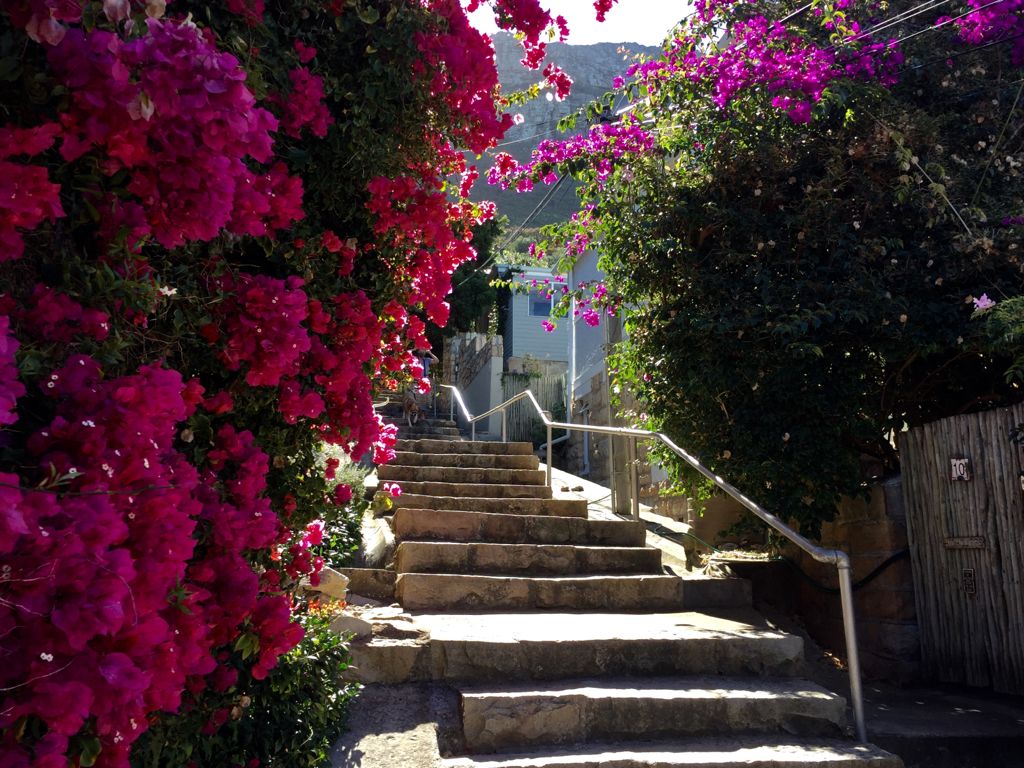 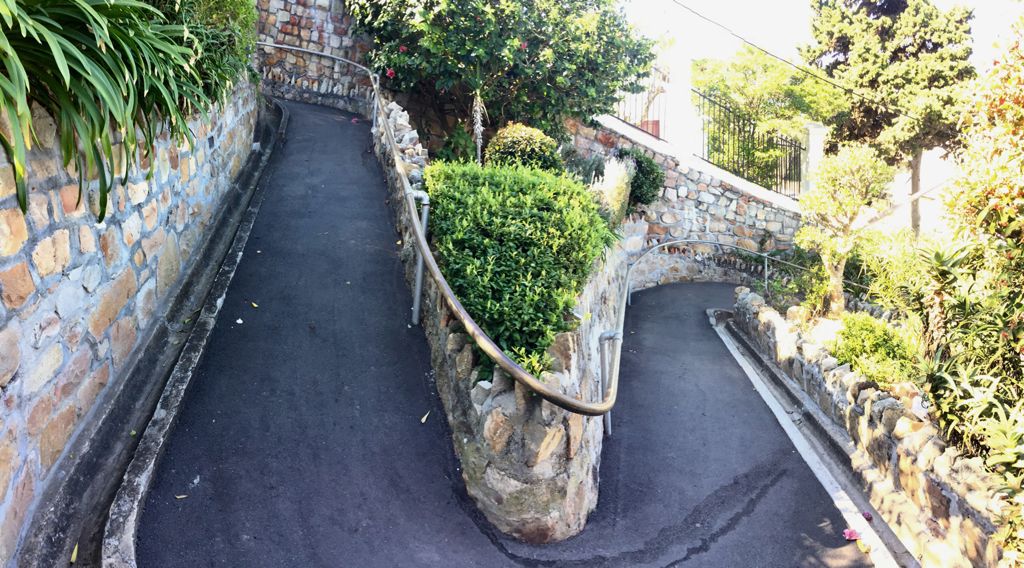 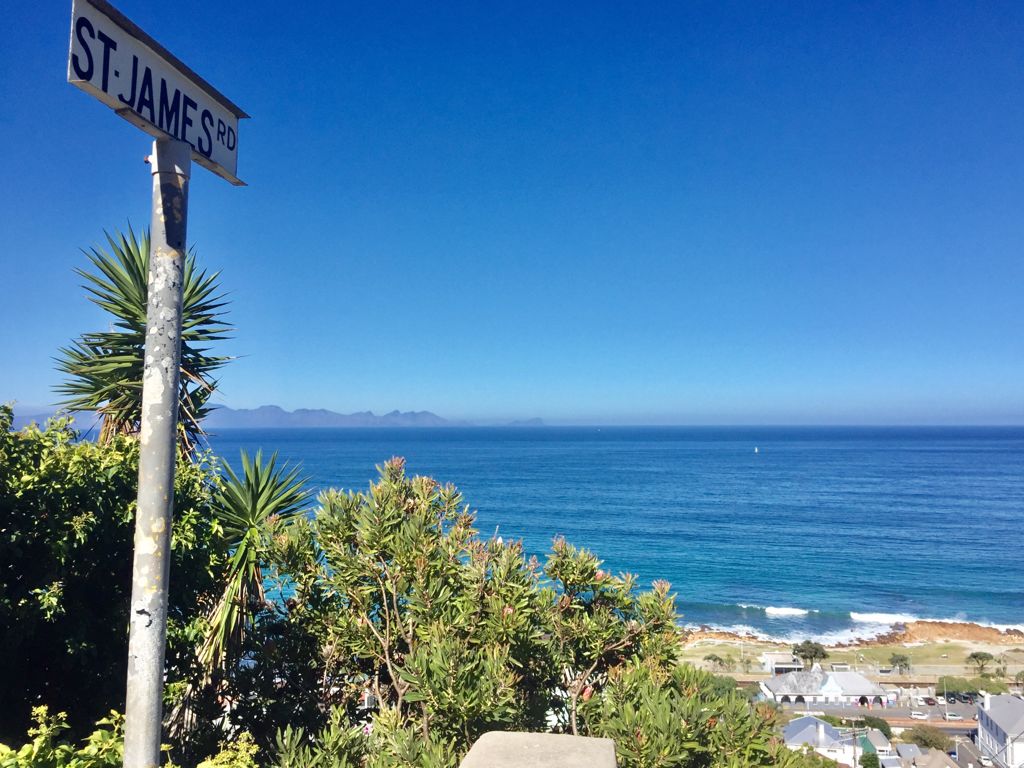 From Brownlow Rd, take the Carstens Rd steps up (274 steps) – the sign at the bottom says “Queens Road,” which is the next road up the stairs. Cross Queens and Devonport, turn left on the sidewalk, right into Leeukop. Opposite No. 26 turn down the Fredericks Steps (283) to Albert Rd, turn left, then right into Woodside Rd, and left into Brownlow. 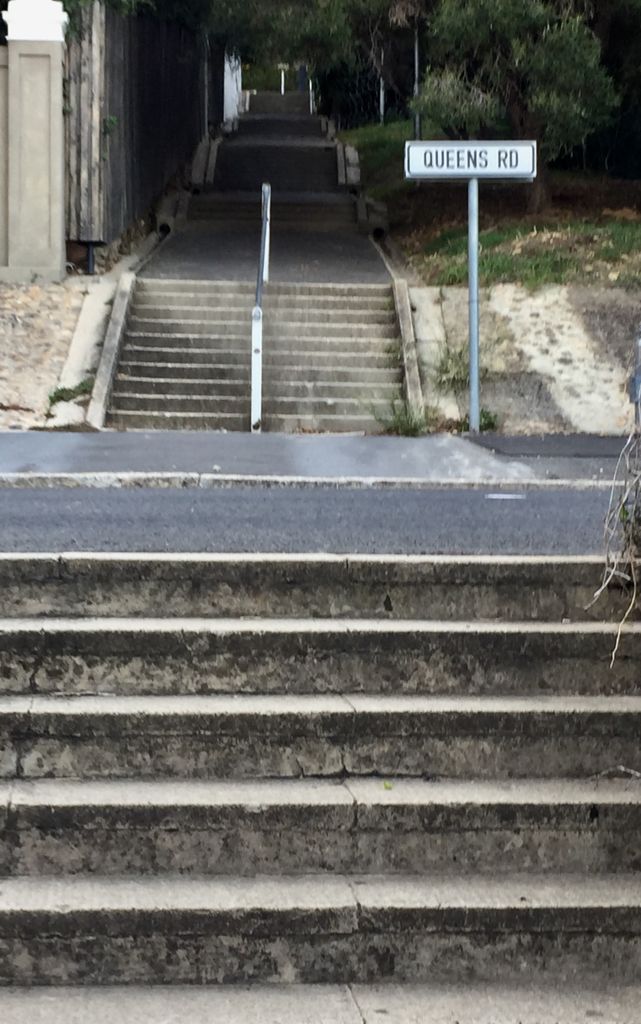 This is the one walk that is also a meander through the village of Kalk Bay. Start at Norman Road, a few hundred metres on the St. James side of the harbour entrance, next to the surf shop. Up about 50 steps, at Gatesville Road, take a short left to go up Ponder Road steps (157) to Boyes Drive, turn right and walk to Manilla Steps. On the descent, when you reach Quarterdeck Road, take a right and either go down the Kimberley Road steps to reach Main Rd or keep going straight along Quarterdeck into Gatesville and turn down the Dalebrook steps (95), although there is no sign. It’s the first set of steps you come to on your left. You come out near Dalebrooke Cafe and Dalebrook Beach. 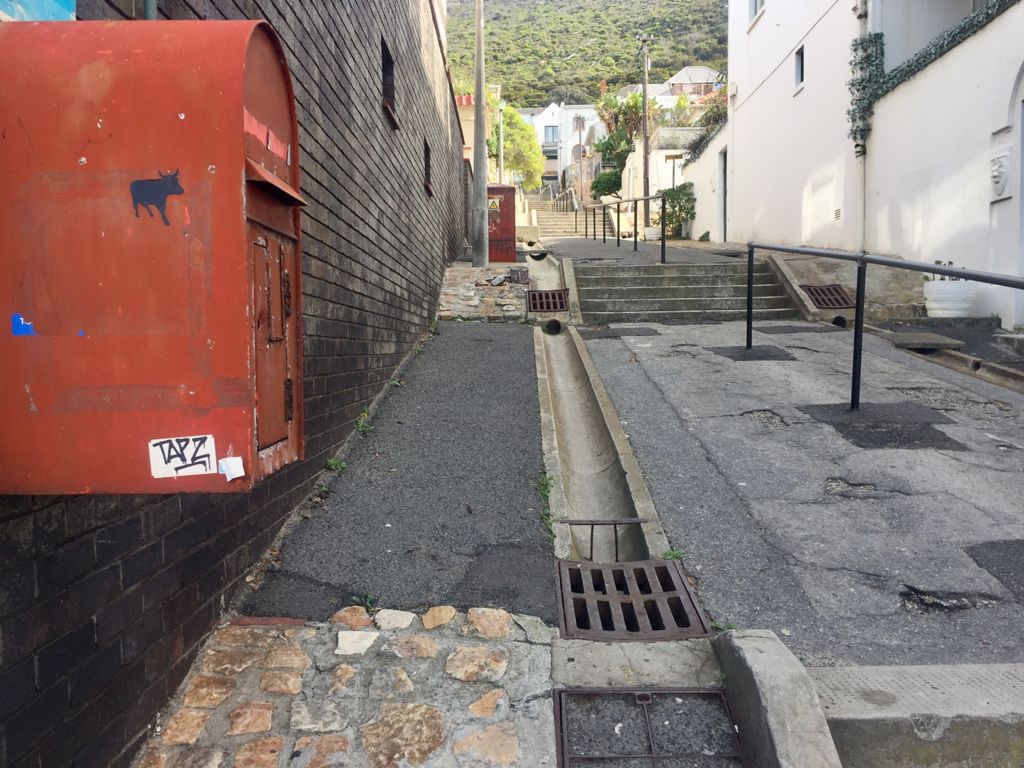 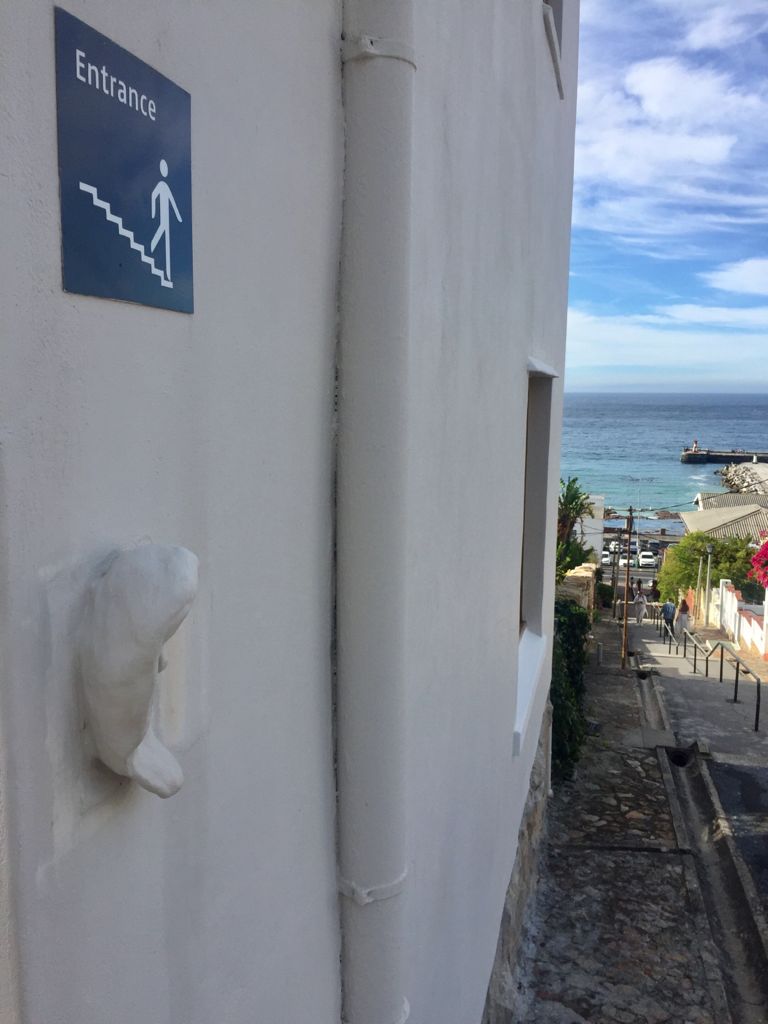 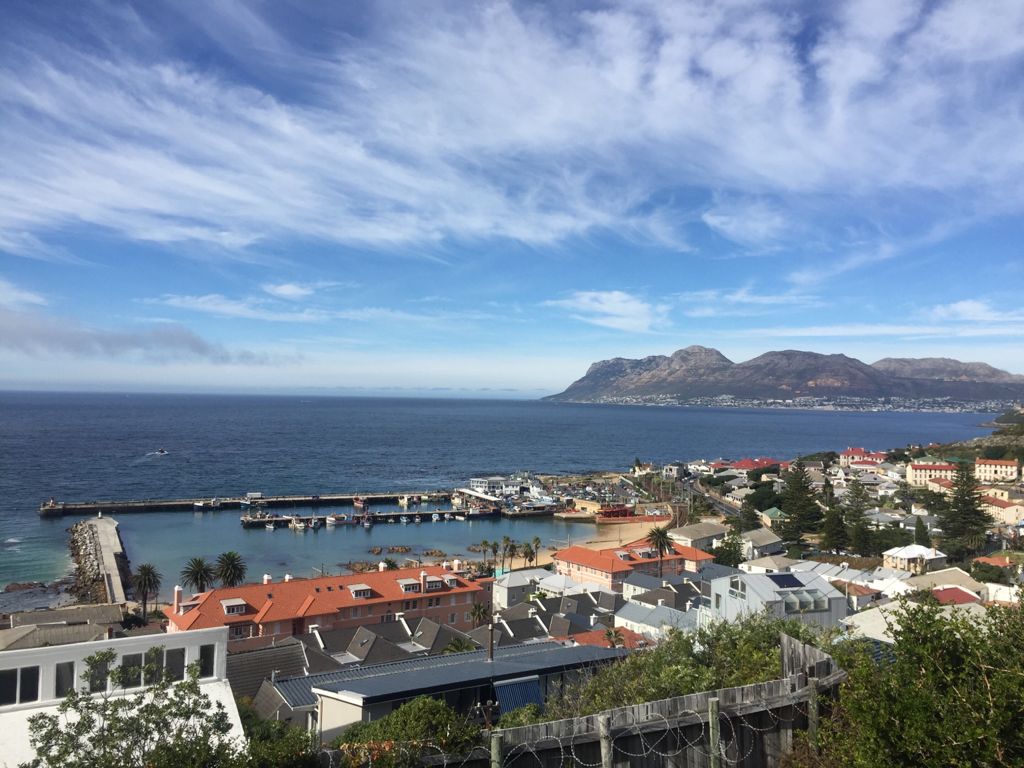 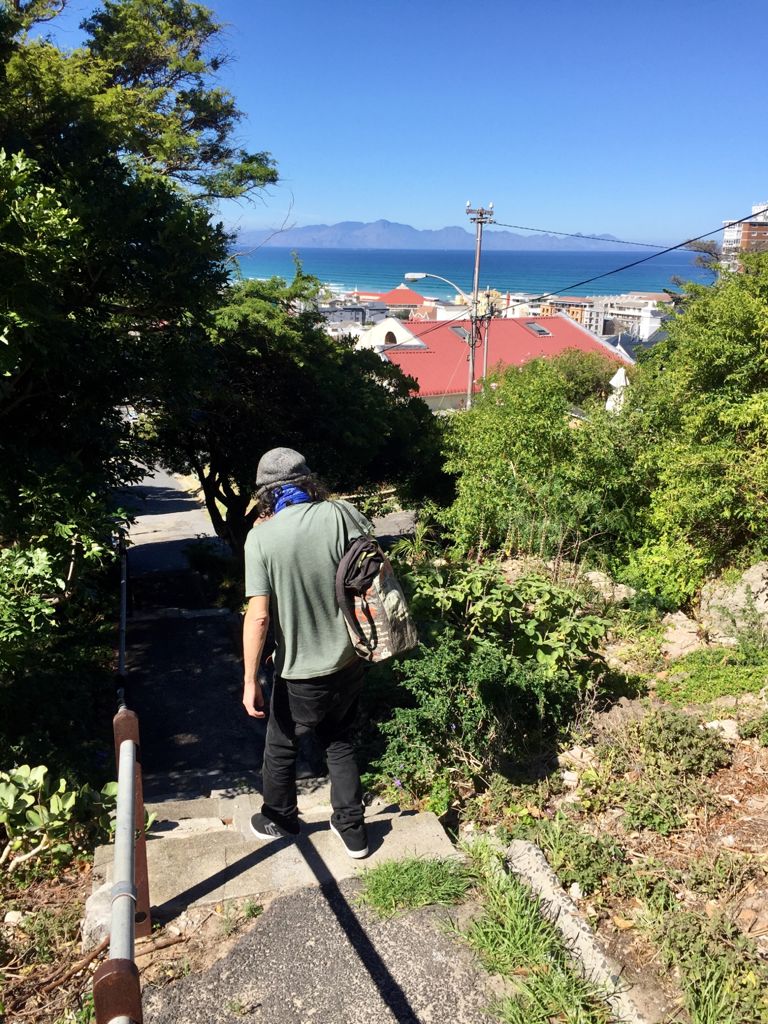 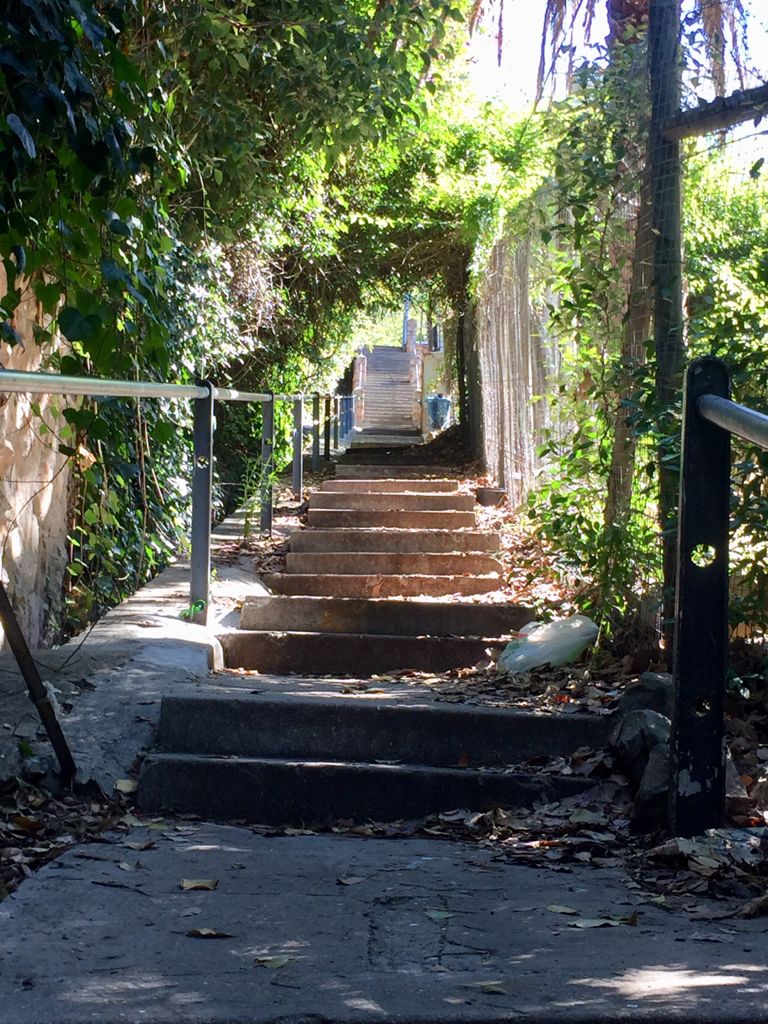 Park near Saunders Beach, at the end of Beach Rd, Sea Point, then walk along Victoria Road towards Clifton. At Conway Court, turn up Florida Steps (142) to Ravine Road, turn right and walk past the Ravine Steps to the end of the road and turn up the Bantry Steps (156) to Kloof Road, and come back down the same way to Ravine Road. Take the lower Bantry Steps (206, total 356) to Victoria Road, then turn right back to Saunders Beach. An alternative is to take the Ravine Steps, which are between the Bantry and Florida Steps. 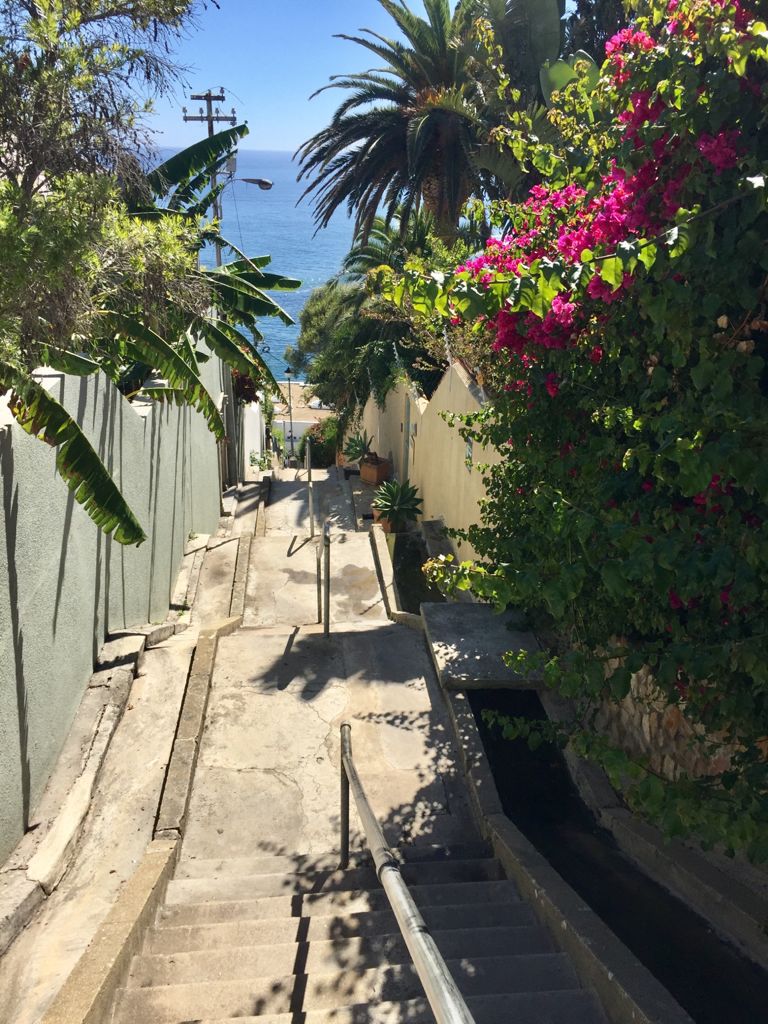 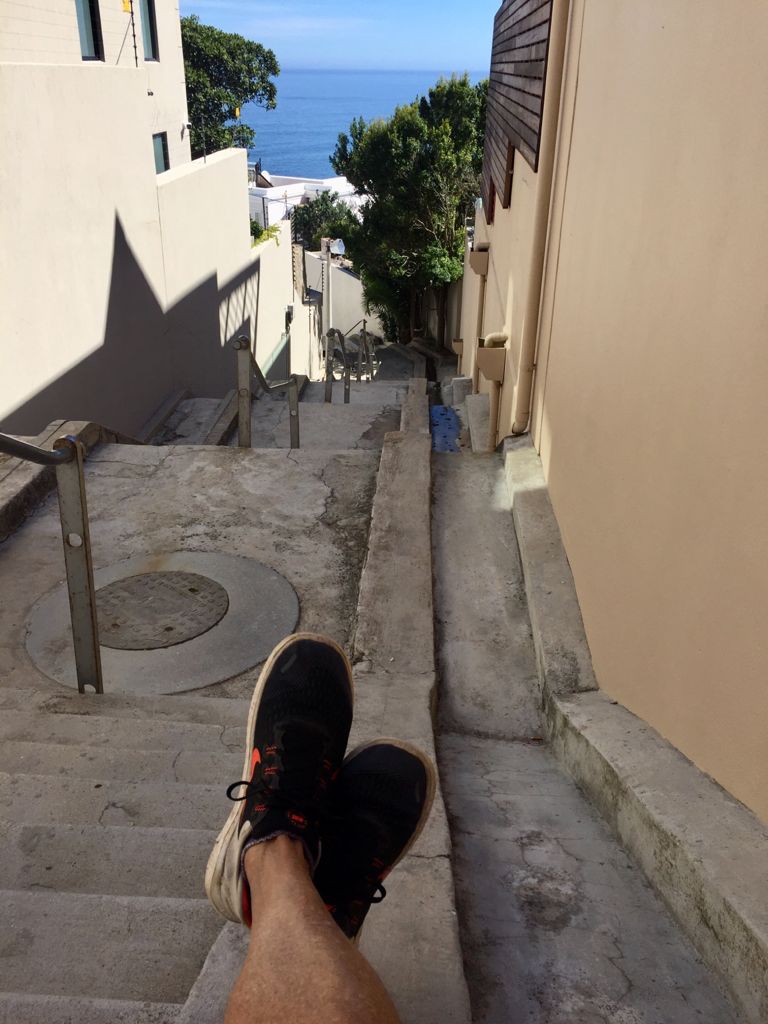 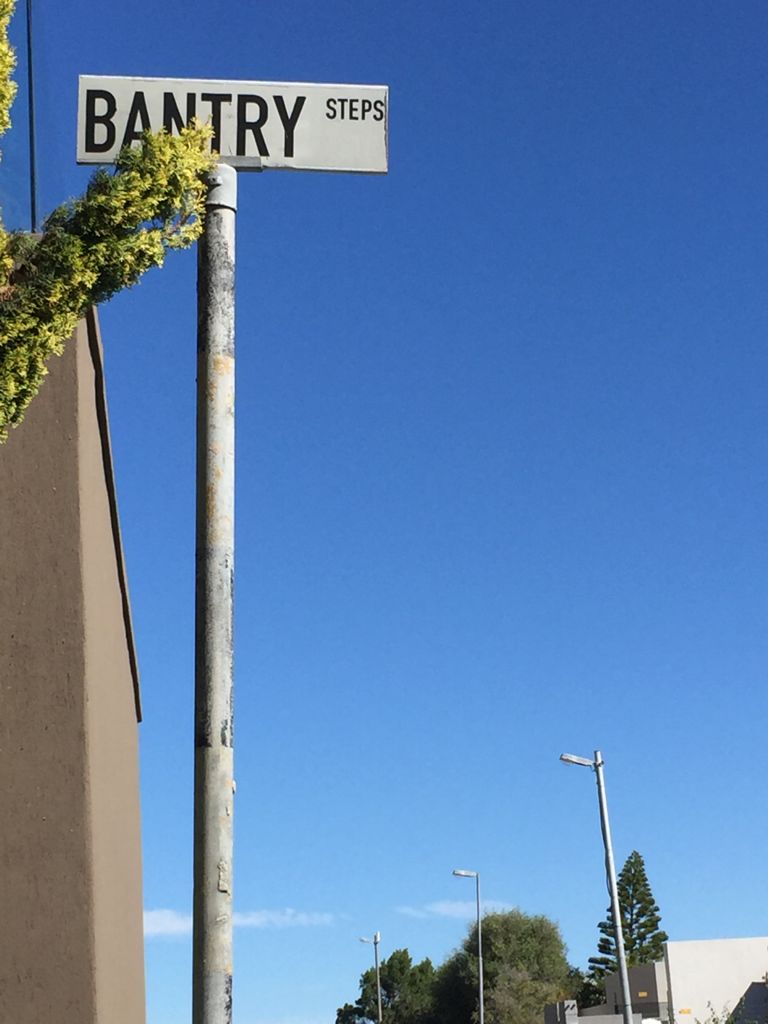 Favourite amongst people looking for a sweat and taking a selfie at the top, Biskop Steps (297) start next to Clifton Terrace, 17 Victoria Road. Go up and at Kloof Road, turn right and walk several hundred metres to Clifton Steps (186) to descend back to Victoria Road. Probably one of the most scenic sets of stairs, apart from the St. James steps. There are several side “steps” (they aren’t really steps but just side roads) along the way. Close to the Clifton Steps, on the Camps Bay side, are Arcadia and then Mount Pleasant steps.

There are another 100 steps down to the beach from Victoria Road, and at least 130 to First Beach..

Cafes: Head to those listed for Bantry Bay. 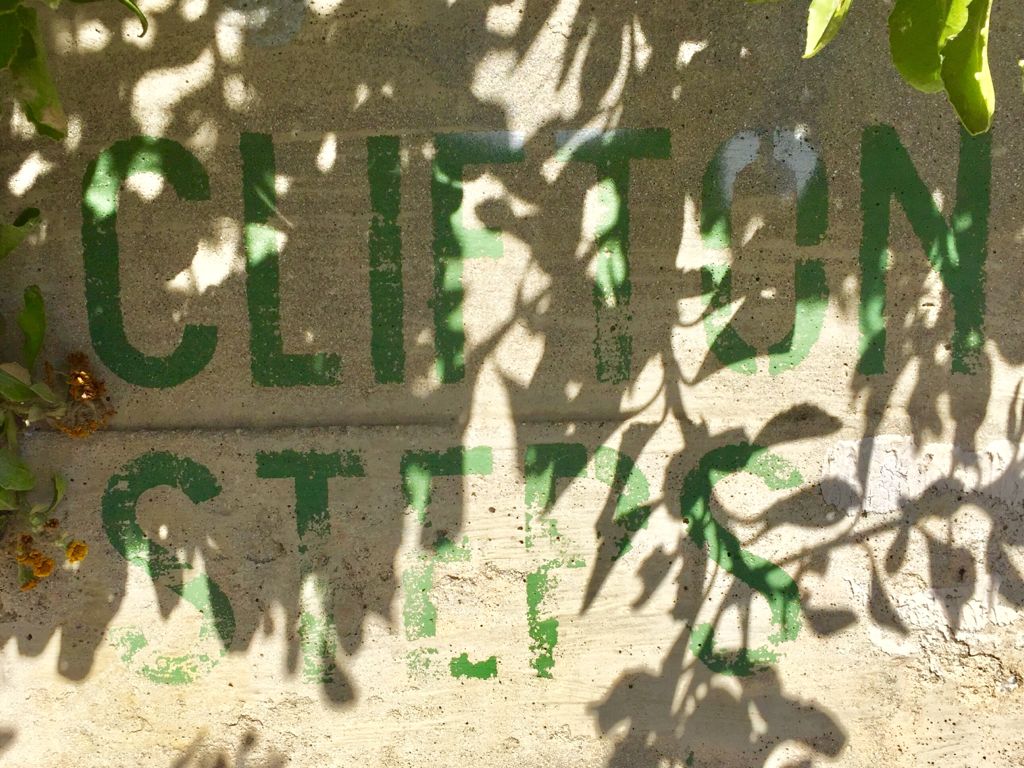 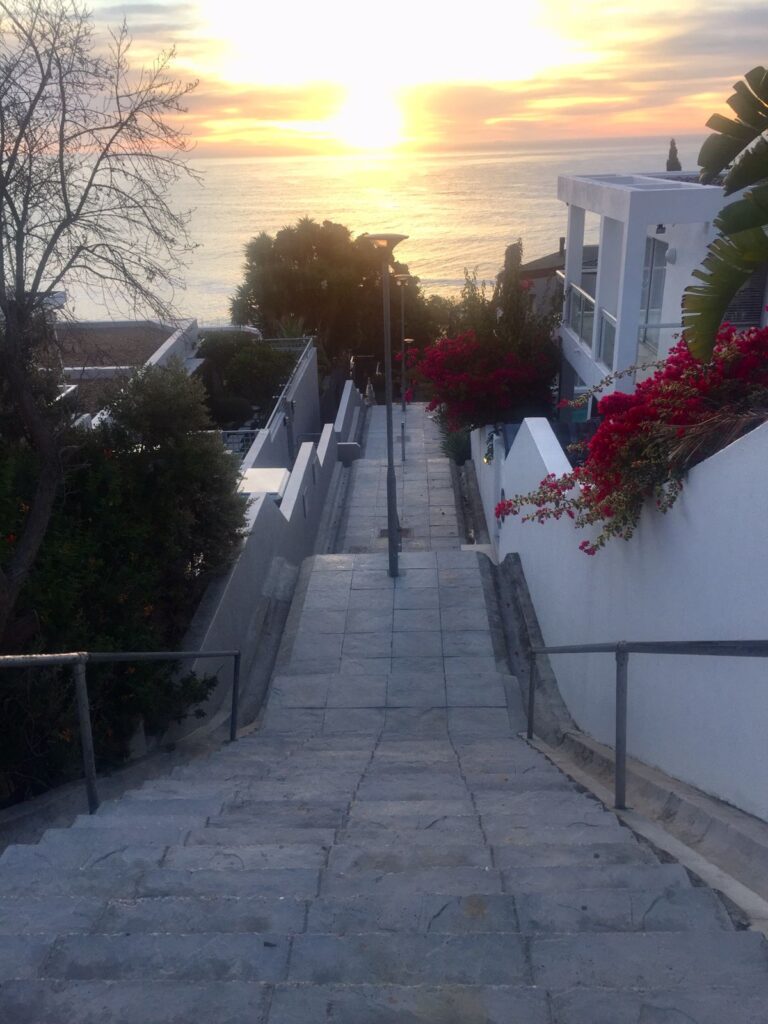 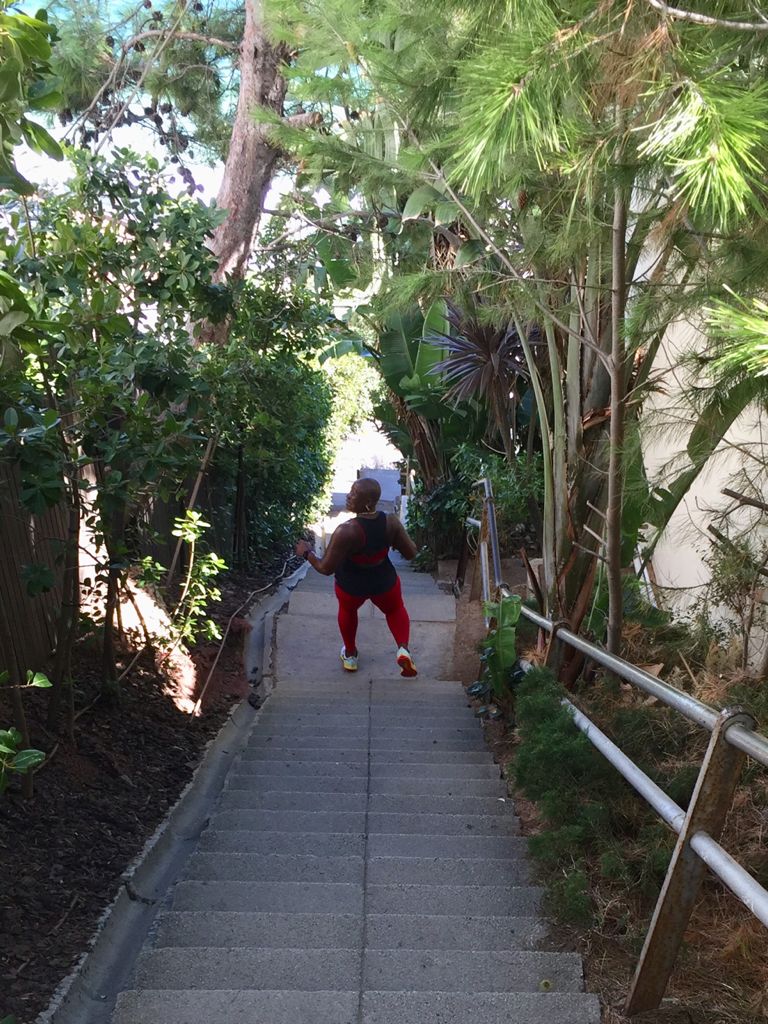 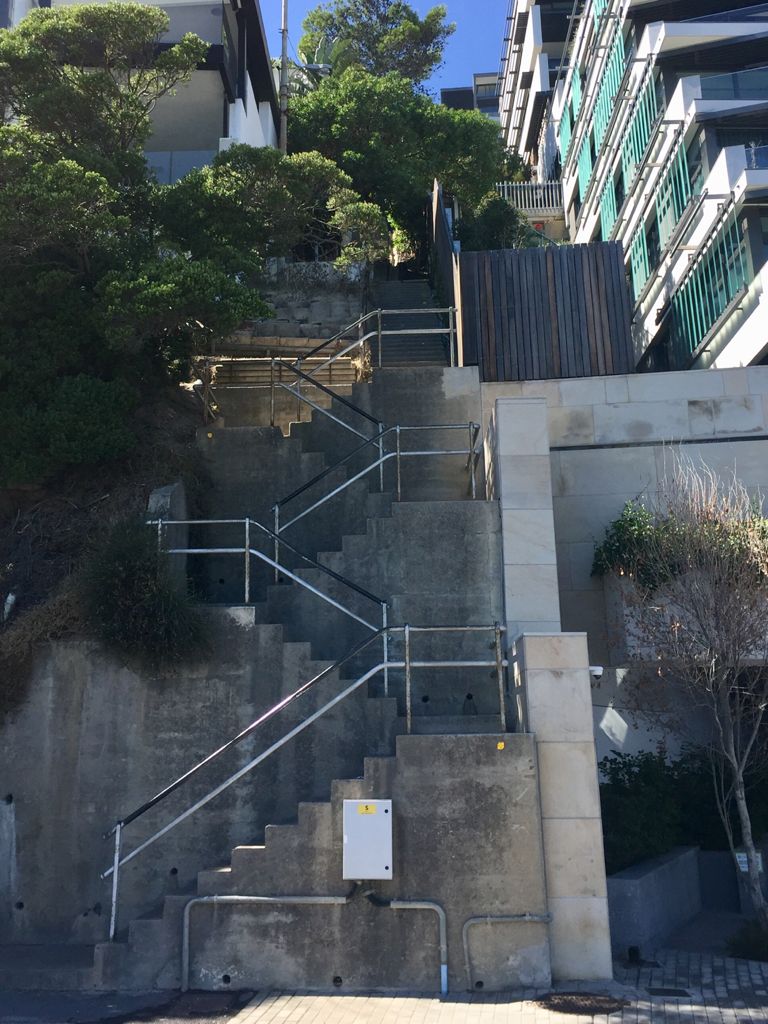 There are plenty other steps around the city, in Camps Bay, Fish Hoek, Oranjezicht and Vredehoek, to name a few. Get walking and explore them! And be rewarded by views like the one below. 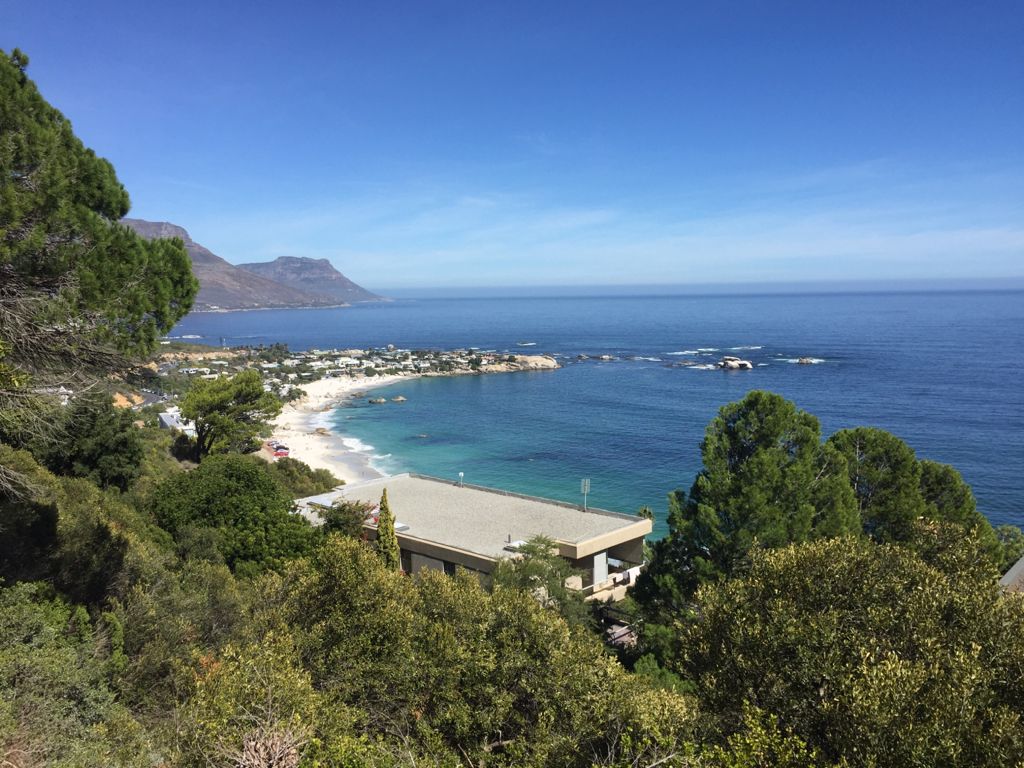